When I first heard about Blackwater Swamp Stomp – new ride coming to SE Virginia, I was thrilled. In fact, I’m pretty sure I was one of the first to register (I did so even before I signed up for Broxton!)

I originally planned to take Justice. But while at Broxton I realized I was REALLY missing Pearl. In fact, it wasn’t just at Broxton. Even after I got home I found myself feeling unmotivated in general. Then, one day, I was supposed to take Justice to NE Park and I just didn’t WANT to. Impulsively I decided to pull Pearl out of the pasture instead. I hadn’t trailered her out and ridden her solo but once before but she did amazing. More importantly I discovered I was actually having FUN. That’s not to say Justice isn’t fun, or that he isn’t a good horse because he IS! (He’s just more fun when he doesn’t have race brain). I went home that night and after mulling things over a bit, I ultimately decided to bring Pearl to Blackwater Swamp Stomp instead. It would be a good learning experience, as I’d never even camped with her. Of course, 3 weeks out from the ride date, we didn’t really have much time to condition but I figured we could rider option at the halfway point. Meanwhile I could focus on NATRC events with Justice. He has more training than my other horses, and I am thinking a more relaxed setting would do his brain good.

Sadly on the way home from SC, my truck started acting up again. Turns out, it was two injectors – about $1,200 worth of work. We didn’t have the money to get it fixed at that point, and we were afraid we would have to scratch from BSS. At the last minute, however, Ashley’s father generously allowed us to use his truck.

In fact, I was so afraid that something else would go wrong, I didn’t pack anything until the day before. I am not superstitious (much) but I have learned it is better to be pleasantly surprised, than crushed later on because you expected too much.
This ride is only 3 hours from us, and after Broxton, 3 hours suddenly felt like nothing. We packed everything the night before so we were able to get up at a normal time (for me), and have breakfast with Ashley’s mom and stepfather at our local small town diner, before loading the horses and heading out.

I am becoming more and more convinced that they only hold endurance rides in the middle of nowhere, as this drive also took us off the well beaten path for a good hour of travel.

When we pulled into ride camp my first impression was  ‘Holy effing SAND!’ I hadn’t been expecting sand, and was immediately nervous. I know horses can get in trouble in the sand, as it SEEMS easy, but really it makes it easy to pull or tweak something. And although I’ve ridden Justice in the sand, I’ve never tried anything like it with Pearl.

There was limited parking for this ride and I was expecting it to be packed but to my surprise we were the 3rd to last trailer to arrive and the rest of the field never filled up. (I guess there were quite a few last minute scratches?)

We got the horses situated before heading to the opposite side of ride camp to vet in. I noticed when we got back to the trailer that they still had Justice’s name on my ride card, so I had to revisit them to get it fixed before we could vet in. As we waited in line, both Pearl and Thunder took advantage of the sand, and rolled and rolled. The other horses and a few riders gazed at us quizzically. I just laughed. Our ponies were having the time of their lives!

Pearl vetted in with a HR of 40 and a body score of 7 (the vet initially gave her a 6, changed her mind and had the scribe cross it out). Ok Pearly, we’re both considered fluffy but whatevs.

While we’re on the subject…I was actually kind of worried how she might stand for the vet. She is not a fan of being poked and prodded and of course she is now completely blind on her left side. I did inform the vet that she is green (completely true), but decided not to mention her impaired vision. She has adapted extremely well, and really doesn’t act any different than any other horse. And at the end of the day, I expect her to behave and to trust me in all situations.

I had worked on prodding Pearl a bit, and briefly on our trot out. However I’d completely forgotten they check capillary refill (her gums) and I was surprised by her reaction to the skin tenting test. The first time they pinched her, she nearly jumped out of her skin, and I suddenly realized she was anticipating a shot. It’s funny because she doesn’t do that with me, and she failed to react every other time that weekend after she realized she was not getting pricked. She did pull away when they tried to check her gums, but considering I had never practiced it with her I thought her reaction wasn’t all that bad. I will be sure to work on it in the future tho!

After vetting in, we were headed back to the trailer when a truck and trailer pulled up in front of us. The passenger looked to be gesturing to us, but the windows were tinted and I couldn’t see very well. I turned to Ashley, and realized she was waving. The window rolled down, and I recognized our neighbors from Broxton! The young lady who had ridden in the 50 was going to be vetting, and her mother had volunteered to scribe. It was great to see them again!

Once back at the trailer, we decided to tack up and get in a short hack before dinner. We may be new to this sport but we have gathered the importance of allowing your horse to stretch his legs and learn ride camp the day before the actual ride. 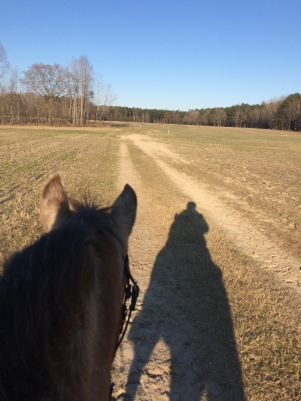 We had about an hour, so we didn’t ride but a little less than 3 miles at a leisurely pace but I was happy with that. Pearl wasn’t in great shape, to my mind,

I was concerned however that Pearl wasn’t really eating. She turned up her nose at the hay we brought from Ashley’s barn, and also at the Fiberplus with her e-lytes and lite salt (which she had devoured back at home). I left it in front of her and gave her until bedtime to finish it.

We headed up to dinner at 5:30. It was a potluck and I made brownies but somehow overnight they appeared to have hardened and had become quite, erm, chewy. (If you had one, I’m so sorry!) I had nothing else to bring so I put them out anyway but left them covered in the hopes they would go unnoticed (no such luck as they were already out in the open by the time I got to them). Ashley piggybacked off me and didn’t bring anything, so I told her if anyone asked, I was going to say she made them! Anyway I don’t think they sent anyone to the ER, but I must’ve pissed someone off because my container disappeared right after dinner and was never seen again lol.

The ride meeting started right after dinner and despite the warning that this was basically a no frills ride, as first time LDers, we got called up to receive a new hoof pick. Just something simple, but appreciated!

I follow a lot of blogs, but am horrible about commenting. Also I have a lot of friends on Facebook. As a result I was seeing a LOT of people I knew, but who didn’t necessarily know me. I tend to suffer from social anxiety, and the one time I tried to introduce myself to someone that evening they looked at me as if I was some crazy super stalker, so I decided to leave well enough alone and not freak anyone else out by marching over and announcing I knew them.

That being said, I immediately recognized Gail and her Fresian Nimo from “The Journey to 100 miles“, Dom from “A Collection of Madcap Escapades“, and Jaime from “Green to 100” (she was actually just 2 trailers over from us). Liz from “In Omnia Paratus” was on the ride list posted earlier in the week but I didn’t see her, and Saiph from “Wait for the Jump” had also pulled out early on (I was bummed because I’m pretty sure of everyone, Saiph would’ve actually known who I was!)

J’s old owner was also supposed to be there, but she cancelled last minute and I wasn’t heartbroken. (I was happy to be able to focus on Pearl without any distractions, or having to answer any questions about why her and not him etc.)
The ride meeting was pretty simple. The trail master (whom I also know…of) gave a brief description of the trails and the head vet warned everyone to take their time warming up in the morning due to the extreme low temps we were anticipating. 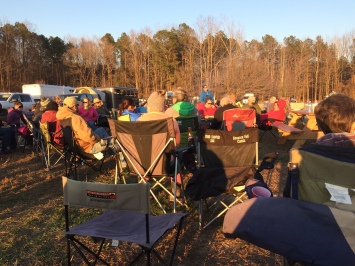 Right after dinner we had some brief excitement in the form of a controlled burn by the landowner which we (the riders) were not informed about, and had more than a few of us wondering if we needed to start evacuating or what. (I ended up running all the way across ride camp to find management before being told what was going on.)

Ashley came to find me, and we hung out by one of the fire barrels for a few minutes – attempting to warm up. As we headed back to the trailer in the dark, there was a sudden thundering of hooves and I spotted a loose horse racing toward us. He stopped a few feet away and I tried to snag his halter but he shied and went tearing away again.

“Loose horse!!” We shouted. Fortunately one of the ladies by the ride tent managed to catch him. However, then came the challenge of figuring out where he came from as his owner was nowhere to be found! Someone commented that he looked like SM’s horse, and a lightbulb went off. I knew SM had trailered down from New York with SK, whom I was friends with on Facebook. I thought I had spotted their rig near ours earlier, so I jogged up the hill to find out. Sure enough, a horse had gone through the portable electric paddock, while SK’s mustang was standing quietly on the high-tie attached to the trailer. A group of us attempted to tackle fixing the fence in the dark, but luckily the pretty Arab’s owner showed up and was able to take charge of the situation.

Crisis averted and back at the trailer again – I noticed Pearl hadn’t eaten any more of her mash so I dumped it and prepared electrolytes for the syringe in the form of applesauce, sweet potato baby food, table salt (non-iodized), Perform N Win, lite salt and crushed Tums for calcium. Thankfully Pearl isn’t horrible about taking the syringe. I dosed her, and followed it by rinsing her mouth with water before preparing 2 more doses for the next day.
It was supposed to get down to 26 degrees overnight so Ashley and I decided to sleep in her Dad’s truck. It is a 4-door with two bench seats, which in theory sounded good. Ashley turned in before me. I had developed somewhat of a chill walking around outside in the dark talking to my boyfriend on the phone (did I mention how nice it was to have cell service all weekend?!) so it took me a little longer but I finally warmed up [enough], and drifted off to sleep.