NOTE: Since I am no longer working a regular day job, I am doing my best to bring this blog back and post somewhat regularly. I am shooting for every Monday/Friday right now (but we’ll see how it goes).

Life is finally settling down after the addition of little Kolton to our family. Joe is back at his 3rd shift job, and as of Thursday I am back at SStables as well. K has been a somewhat colicky baby and currently has a cold on top of that. Being that I am on my own with him essentially 18 hours a day, it can be challenging. Typically he is easiest in the mornings (when Joe is home), while his “fussy time” tends to fall between 6pm and 10pm. During this time, I cannot put him down or else he commences to screaming his little head off. Needless to say this makes it challenging to cook dinner, do dishes, clean the house, shower or do anything else I like to accomplish during that time. I often find myself throwing something together for my daughter, whilst waiting to eat myself until Joe gets up at 8:30 to get ready for work. Even now, as I type this post he is asleep on my shoulder.

I’ve mentioned before that since we acquired our own trailer in the spring, I have been unable to successfully load Justice in it. The first time we tried I was taken completely off guard by his behavior, and was very nearly injured (and frankly quite shaken) in the process. He reared, rocketed out backwards, dented one of the doors, broke a trailer tie, one of the butt chains, and his halter in 2 places, and ended up crushing and pinning me in the corner of the trailer. I was only a few weeks pregnant at the time, and Joe almost flipped. I myself have been around horses so long that I am typically very confident when it comes to riding/handling them, but I can honestly say this was one of the few times I genuinely feared for my life.

I did attempt to work with Justice a couple times over the summer. I even parked the trailer in his pasture for a couple of weeks and fed him regularly in it (first placing the bucket on the floor and later moving it up into the manger. But the second I would go to close the door, he would by all appearances panic and shoot out backwards.  (Or, occasionally, he would whirl around and stick his head out the back). We discussed possible options – trailering him loose and backwards, with stall guards rigged to prevent him from sticking his head out (we don’t have stall guards so never actually got around to this). Then my mom’s trailer was totaled over the summer (she has yet to replace it), and Paula put hers up for sale. We determined we needed to purchase Paula’s and so began to advertise ours – both on Facebook and craigslist without any luck or real interest. To be honest I’m not all that surprised – in pictures our trailer looks like a typical small older 2-horse bp – nothing to write home about. In real life it’s actually quite nice though, and everyone who has gotten the opportunity to view it in person has said as much.

Meanwhile I have been lamenting the fact that we are currently paying board on Justice at CS (Pokey and Pearl stay at SStables as part of my working arrangement), and we are not even using him! Furthermore, Justice has definitely claimed us as his own. Without a doubt, he knows who his humans are and he is always glad to see us. It’s funny because when we got him, I didn’t see him as a very personable horse but over time he has become just that. It’s so nice to have a horse who is actually glad to see you (as opposed to Pearl, who I swear flips me the bird whenever I approach her in the pasture), and not moody/pushy/mouthy like Pokey (Pokey is my baby as we all know, but he can definitely likes to test boundaries at times). Then, only a couple weeks before my C-Section, I happened to catch a program on RFDTV, wherein Craig Cameron was working with a hard to load horse. Now, I don’t really follow any particular trainer or their methods but in this particular video the horse was indeed giving him quite a hard time of it and so I was intrigued. To make the long story short, I was left with a number of new ideas about what to try next time I attempted to load Justice. I honestly didn’t hold much hope that they would work, but it was worth a try.

Fast forward to last week. I was going stir crazy from being housebound since the surgery, and decided I simply must get out before I lost my mind. I didn’t feel ready to ride yet, but on a whim I hooked up the trailer, grabbed a whip, and pulled Justice out of the pasture. I lunged him outside the trailer for a couple of minutes before asking him to approach and self-load. Naturally, he balked the first couple of times. But then he stepped up. Just one foot, but it was enough. I praised him, offered him a slice of apple and allowed him to rest. He picked the rest up quickly! The hardest part was convincing him to get both back feet on board. He seemed to believe that he was too big to fit his entire body on the trailer. That was where the whip came in handy. A couple firm taps and he appeared to rethink things.

It helped, of course, that I had dumped some grain in the trailer manger beforehand. After half a dozen or more tries, I was finally able to drop the lead rope, and shut the door. I expected him to panic, to shoot out backwards as he had many times before. But to my surprise he stood quietly. Still, I didn’t want to push our luck. I opened the door, asked him to step back out and showered him with treats and praise before returning him to the pasture.

A couple days later I decided to try again. I opened the trailer door in advance, and dumped a little more grain in the manger before fetching Justice. As we approached the trailer, I noticed his ears were pricked and his head up, as if he were excited. I braced myself for trouble. What happened next shocked me. That horse practically dragged me over to the trailer and jumped on board before I could even pick up my whip! I noticed he left his back feet out the first time (leaning as far forward as he possibly could to reach the grain lol), so I asked him to back out and try again. I barely had to touch him with the whip. He jumped right on (all four feet this time) and stood happily on board, guzzling his grain. After a few moments, I asked him to back off and repeat the process. Four times total, he jumped aboard and stood like a rock until I asked him to unload. Finally I closed the door again and left it closed – a little longer this time. This time around I had closed the trailer divider and I wasn’t sure if he might react to having what he might perceive as less space, but to my surprise he again stood completely quietly, looking around every now and then. It occurred to me then that it was probably a good idea to let him ride loose and not attempt to tie him in the future. Justice has a history of pulling back at odd times and as a result I avoid hard tying him now if possible.

At that point I had the better part of an hour still to kill and I was determined to make the most of it. I love my children of course, but caring for them both with little sleep and largely on my own has been draining to say the least. I had sworn not to ride until 6 weeks post-surgery to allow myself to fully heal, but I FELT fine! I had no saddle – not even a bridle with me. But I have ridden Justice many times in just a halter. So I threw the lead rope over his neck and looked for a place to mount. It’s tricky mounting a 16h horse without lying on your belly whatsoever but fortunately there is a taller than average mounting block outside one of the arenas at CS and I was able to climb aboard without an issue. Of course, once I was mounted I realized I had a much bigger problem facing me – how to get down. It’s almost impossible to dismount bareback without twisting and lying across one’s stomach, unless one is quite agile and can swing nimbly off. With his height and my condition, that was not happening.

I rode him around for close to ten minutes. Around the field behind the trailers, around the trailers, and in the front arena, all the while puzzling over how I was going to dismount. In the end, I simply rode him up to my truck and dismounted using the bumper (which was incidentally just the right height). Problem solved! 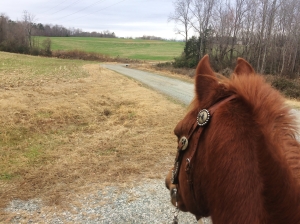 I won’t bore you with the details, but riding with the saddle was much easier. I was able to brace against the stirrups and minimize the jarring to my stomach and incision area. In fact, I had no pain or soreness whatsoever! J & I ended up hacking to the end of a nearby dead-end road and back. 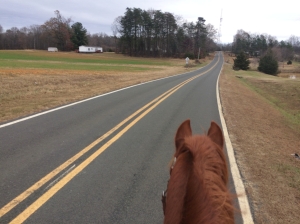 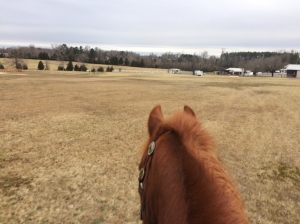 At one point he broke into a jog, and it was literally that. Tiny baby steps, back relaxed and stretched and head way down. I cannot begin to tell you how happy this made me. If you look at all his ride photos this horse has always moved in a tense, hollow way. I noticed that his old owner also always rode him in a running martingale. I understand that things may be completely different at an endurance ride where  there is a lot of excitement, but this is still a huge change even from last year. Only recently has this horse felt safe enough to relax in this manner. (At times he will almost appear downright lazy!) I realize it will probably be a while before he starts to relax at actual rides (provided we ever make it to any), but I’m determined to set this horse up for success…which is another post altogether….